TERRYN DAVIS: A FRIEND OF ALS RELOCATES TO “THE CENTENNIAL STATE” 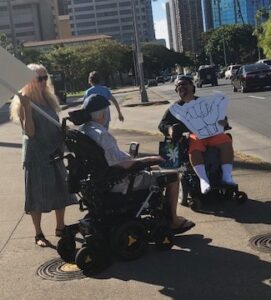 You wouldn’t miss The Lady With The Poofy Hair. Terryn is with Mike Ladera and John Repczynski. Ronaele Whittington just turned her back. At the 2018 Signwaving at the state capitol curbside 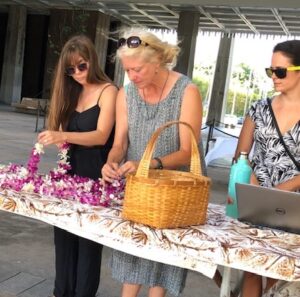 At the 2018 Memorial with Natalie Fonda and Rachael Loebig

No, she won’t be running around anymore like a chicken with no head.  At least, not on Oahu.  The ALS community of patients and their families will miss the familiar “poofy-haired lady,” as Justin Hendrix described her, as she tended to their needs, oftentimes putting them before her own. You see, Terryn is relocating to Colorado, where her older sister needs her help as she battles dementia.

Terryn had already been on island for two years when ALS Association-Golden West Chapter called on her to deliver care management services to families living with ALS. She had then been working as a Physical Therapist working with elderly folks in nursing homes. Fellow ALS caregiver Ken Ching informed me that when I mentioned her name one day after Terryn took the ALSA position,”Yeah, no wonder she sounded familiar. She took care of my mom at Palolo Home!”

It wasn’t a big stretch for Terryn when she moved from her PT position to Care Manager for ALSA. But it was a vast undiscovered field in Hawaii’s ALS care. She became the ALSA face in Hawaii, as the chapter headquarters is in Agoura Hills, California. She was a lone face for a long while until longtime friend, Kahala Howser moved to ALSA from MDA-Hawaii to assist as Regional Director of Community Outreach for Hawaii.

As a person, Terryn is kind, generous, and big-hearted, like her laugh. Generous, sometimes to a fault, as patients became friends and their families – hers. As a healthcare worker, she is tenacious with her care plans, innovative, and her voice for advocacy – strong and boisterous.

“I have always fought for a strong standard of care for ALS patients,” Terryn musingly ponders as she shifts in her seat to face me, abandoning the waffle she had on her plate. It was the Saturday morning Kyong Lamson and I took her out for goodbye brunch. “Family physicians need to refer patients to a neurologist quickly at the slightest suspicion of ALS. Getting them diagnosed early will give them the chance to try the new drugs we have now to preserve their lives and abilities.”

So it’s aloha, not goodbye to our dear Terryn as she moves to new adventure, new scenarios, and new tender memories. We bid her good luck, and she promised to come back for visits. After all, she is hanai to many families and a dear friend and confidante to me. 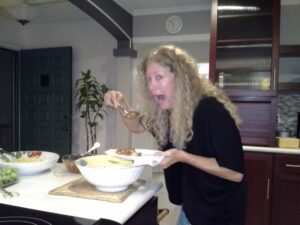 Terryn goofing at a dinner in my house, 2014

At the 2018 Memorial with Katherine O’Connor 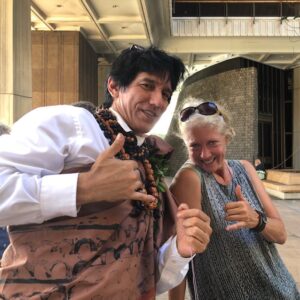 With Kumu Keahi Renaud at 2018 Memorial at the State Capitol