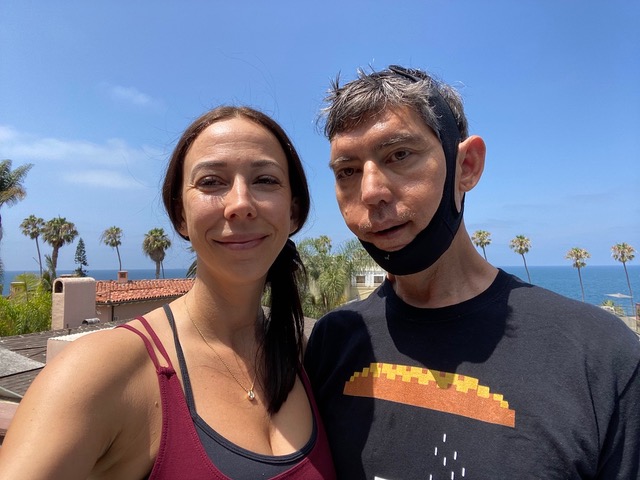 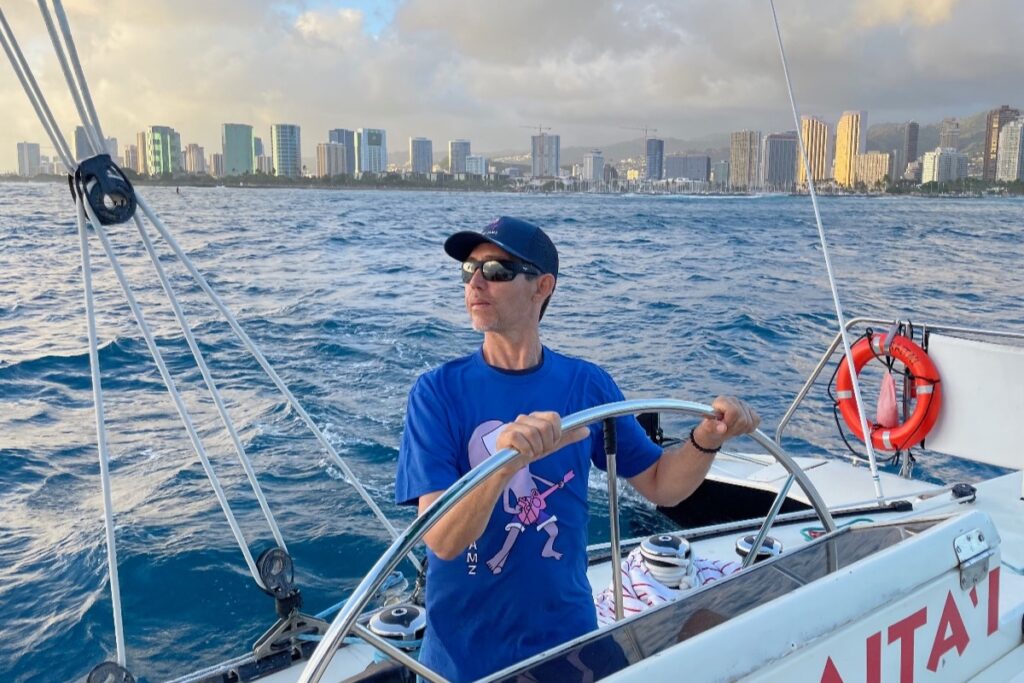 September 23, 2021, Honolulu, HI – Local artist, waterman, and small business owner Eric Chun announced the launch of an online auction today to raise funds for lifesaving therapy in his battle against a disease that has taken multiple members of his family. Since his 2018 diagnosis of ALS, Eric has received cutting edge treatments in San Diego instrumental in prolonging his life and delaying debilitating disability. 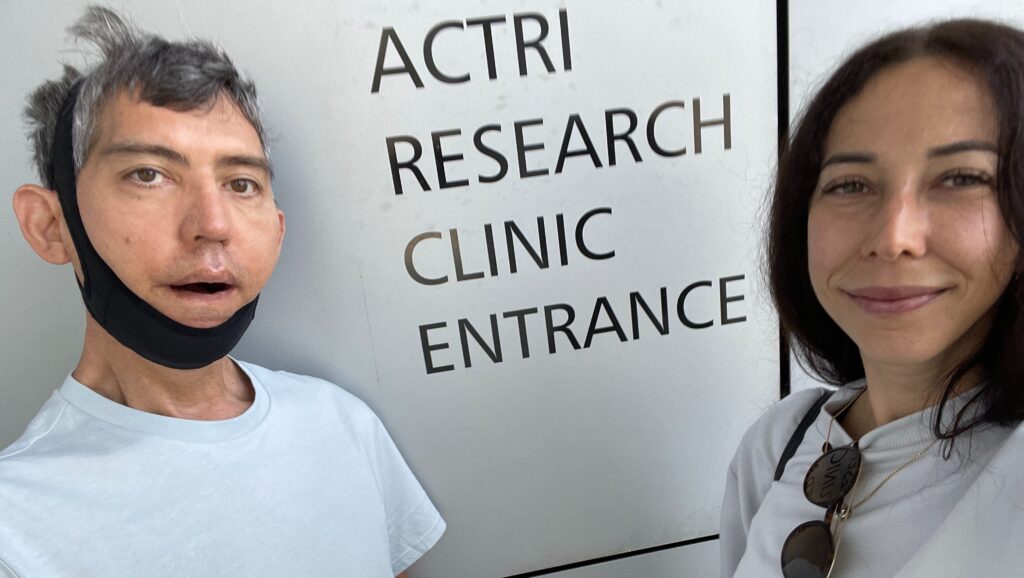 Eric and Julia in one of their mainland trips for treatment

Eric now seeks to participate in a new treatment therapy which has shown promise in reversing muscle and neurological damage and regaining function and mobility for ALS patients. Eric’s mother’s side of the family carries the genetic form of the disease. His mother, watercolorist Peggy Chun died with ALS in 2008. Her twin sister Bobbi (also an artist), their mother, and maternal grandfather also passed away with ALS.

Watercolorist mom, Peggy Chun, and a young, healthy Eric. Peggy lived a full life with ALS in the early 2000’s without benefit of the treatments to prolong life and delay disabling developments. These treatments were developed after Peggy’s death in 2008.

While Eric’s condition has been slowed down by previous treatments, it has now progressed. He is now being fed through a tube in his stomach. His arm and hand movements, and verbal communication are more limited. Despite the progression, his family is thankful for his continuing ability to walk and breathe on his own. 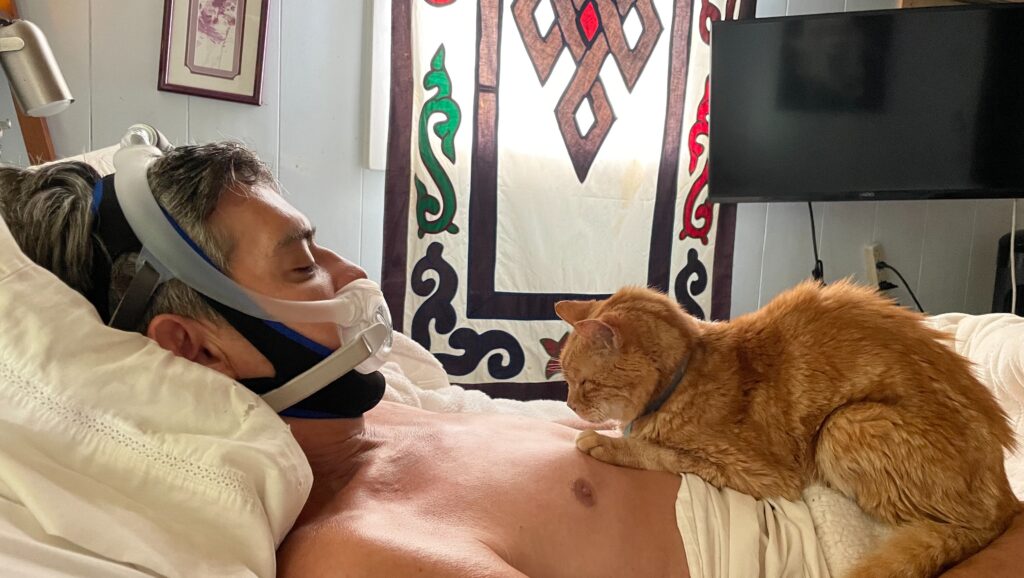 Eric uses a breathing machine that pushes air into his lungs.

Eric is determined to survive this disease with the help of recent and future medical advancements. “He is not giving up this fight. We are very hopeful and excited for the next phase in his treatment plan. It involves a three-week intensive treatment at BodyScience in Miami, which specializes in ALS, Medical Chemistry and Molecular Medicine: an area of cellular medicine that targets cellular repair and which has been successful in halting and even reversing ALS in patients from around the world,” stated Eric’s wife and primary caregiver, Julia Graham. 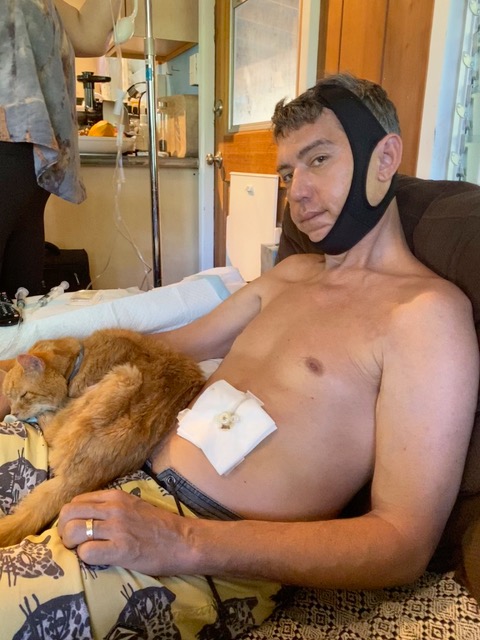 Water and nutrition is flushed through a tube that goes directly to his stomach.

But Eric’s individually-tailored regimen costs upwards of $30,000 to $50,000. His network of friends (Team Chunzy) is coordinating an online auction with a goal of $50,000 in honor of his 50th birthday in October. Team Chunzy member Courtney (Meagher) Sibley stresses that he has the innate disposition to surmount this challenge: “As a lifelong athlete and waterman, his body is tough. As an accomplished artist, his mind is sharp and creative. And as an incredibly loving human being who is embraced by so many, his spirit is strong!” As an example of his positivity and determination, Sibley shared that when Eric could no longer strum his ukulele with his right hand, he rigged a device that allowed him to strum with his toe. To view Eric Chun’s Toe Jamz music videos, see https://www.youtube.com/channel/UCbt_hB2XWvED53RAbEBmdDg

To participate in the auction, go to www.32auctions.com/teamchunzy2021. Bidding will open 5pm, tomorrow Friday, September 24th, and run through 5pm, Sunday, September 26th. To participate, bidders need to create a FREE user profile. Eric’s family and the organizers of the Team Chunzy auction invite you to join their ‘ohana in the efforts to halt and reverse Eric’s ALS by supporting the auction.