May 2021 as ALS Awareness Month 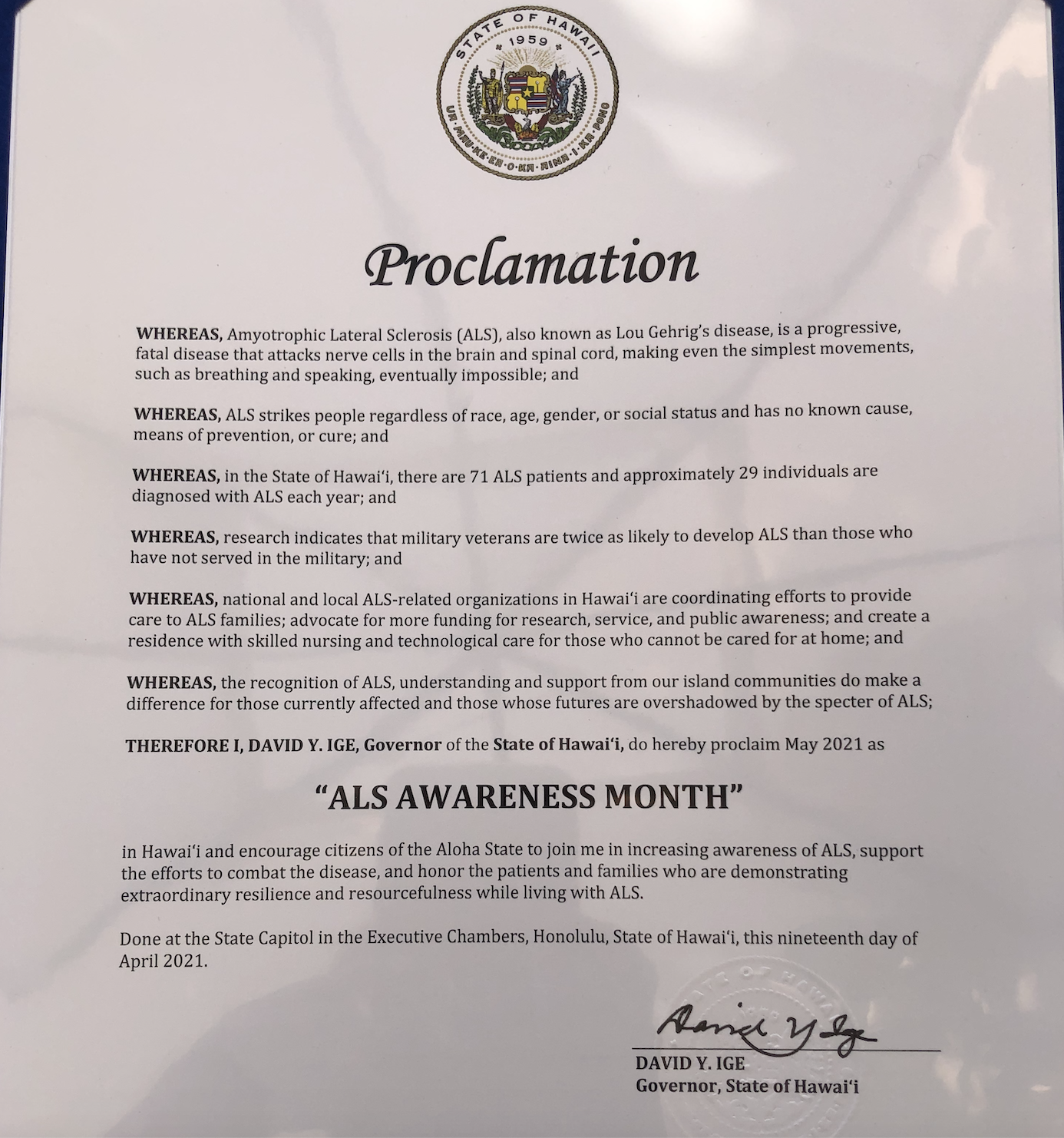 May slipped in scarcely noticed in the heels of a conference I was attending last weekend. May 1, for me, started with a beach clean-up sponsored by the UP Alumni Association of Hawaii and the Knights of Rizal, a local Filipino organization that aims to uphold the virtues of Jose Rizal, the martyred national hero.  Then Sunday came, with more get-togethers, actually a fundraiser for ALSFH, sponsored by prolific Filipina painter, Leni Marie Acosta Knight, already a past donor to ALSFH.

When Monday, the 3rd, came, I was glad for a quiet pick-up at the State Capitol, which when I visited at 1pm, was still following pandemic precautions: checking in with the guard, and waiting outside the double doors to the Capitol in the parking lot, for a staff member from the Governor’s office, to bring down the Proclamation document, a far cry from the yearly tradition of a big crowd of supporters and agency representatives, crowding the Ceremony Room in the fifth floor, while the Governor read the proclamation. It was always followed by a pALS reading his response, detailing once again how much our community needed help from all quarters.

The proclamation, in its stately blue cover with the seal of the State of Hawaii embossed on it, said the right words, the same words it contained when we started this tradition almost a decade ago, under the then Governor, Neil Abercrombie.  The words changed little: only the statistics proclaiming that “…71 ALS patients and approximately 29 individuals are diagnosed with ALS each year….”, a recent inclusion. The statistics are generated by count of those who reach out to ALS Association – Golden West Chapter for Hawaii (ALSA) to avail of their services, the only non-profit now serving our local ALS community with case management and patient follow-up.  Muscular Dystrophy Association-Hawaii closed its offices in Hawaii about two years ago, ending a long history of working with pALS and more formally with our community since 1998 when Joyce Okahashi and I started the first, continuously running ALS Support Group on Oahu.

Many moons passed since then; many patients have come and gone as quickly as their ranks have been replaced.  We developed traditions, including these proclamations by our island and state leaders to assure that our community and the voices of pALS and their families are not obscured by the rarity of the disease and the cacophony of life on earth, including the pandemic.

ALSA also kept up organizing proclamation ceremonies in the neighbor island counties.  Arriving earlier by mail and herein pictured is the Proclamation from Mayor Derek Kawakami of Kauai County which includes Niihau.  Maui and Big Island Counties will also send be sending in theirs by mail.

There is not much fanfare this month as we ride the seemingly quietening but still lingering waves of the pandemic.  It is our great hope that vigor and excitement will return at next year’s ALS Awareness Month. In the meanwhile, we solemnly remember the tasks we set out to do as members of the small but deserving ALS community. Here, at ALSFH, we continue to soldier on aiming to set the 4th ALS Residence on the country and only the third state to have one for her ALS residents.