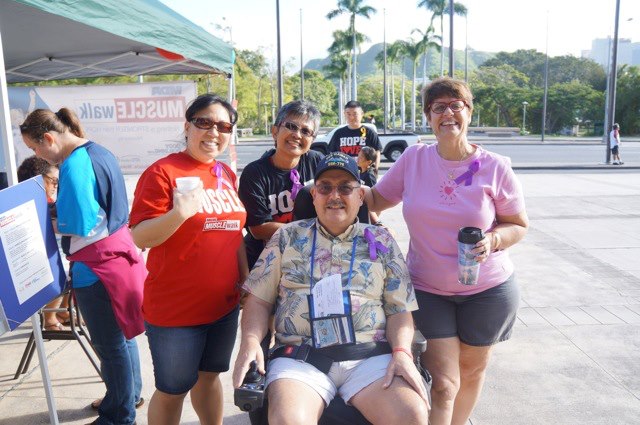 December 26, 2019, Kailua, HI. If there were something you would take away, say, from a short meeting with Paul Gagnon, it would be that his eyes twinkled even if talking about something serious. You’d notice he would follow a profound statement with a witty remark. Then his cheeks would soon crease in folds as his smile breaks and reaches his eyes. That’s how I remember Paul, the mustachio’ed patriarch of his large clan: his thoughtful ideas, steadfast calmness despite his years with ALS, his immaculate aloha shirt, and his genuine love for all around him – his family, friends, and us in his support group.

It was a shock to read a text from Gerri, his beloved daughter and erstwhile caregiver, about his death Christmas morning. I can imagine that it would be an event that he orchestrated, because Paul is the kind of man that would not go one way, without him making arrangements to his liking. Or, maybe not. The luckiest of us would have to collude with his Maker to be able to negotiate the terms of his passing. As far as I know, unless we take matters into our hands, our deaths are not ours to dictate.

The ALS support group that used to meet at Queen’s often had social gatherings at Paul’s comfortable home in Kailua. He, Gerri, and Larry had moved back to the mainland (Florida) sometime in 2015 to join the Gagnon clan, to be close with the other kids and their families. But always, always, Paul’s heart was here was with us, where he lived his days a faithful and loving husband to Daria, whose early passing brought the company of daughter Gerri and her husband, Larry, to his side. I will always remember Paul as a supportive friend, a wise and giving counselor, and uber-defiant pALS.

At this time, little is known of the circumstances of that Christmas day in Florida, but this we know: we loved him then, and we love him now, especially his family whom he generously shared with us. That love is in our thoughts of them as we pray for the repose of his soul and comfort for the grieving family in their loss of Pop. Paul always appreciated his children and grandchildren, detailing each one’s achievements in his very newsy and Proud Papa/Grandpa Christmas letters.

Godspeed, Paul! Share a Heineken with Britt, and everyone else in God’s Tavern. We will see you all someday.