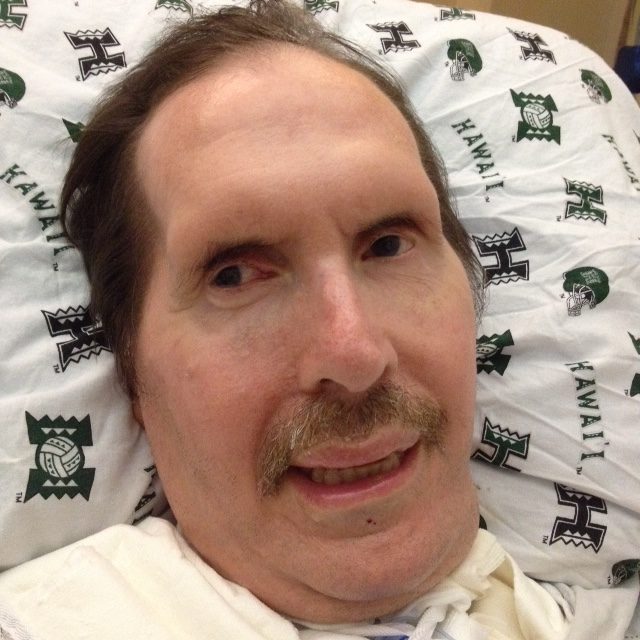 Brian Burke’s life story was not always a sad one.  He was born the youngest of five children to Cecilia and Darrell Burke.  Like any health boy, Brian grew up with his family, which included Big Sis Katherine, in Benton Harbor, Michigan.  Early life was the usual – elementary, high school, an Associate degree in college. He didn’t engage in any sport but football and basketball occupied his interest as a bed-bound spectator in the years he had ALS.

Sometime before 2002, when sister Katherine found him homeless in a park, he lost his ability to work because of a bewildering illness which made walking almost impossible and his speaking slurred. It struck him while he conducted a thriving company, Discount Moving. In 2002, he was diagnosed with ALS.  For the next 19 years, Katherine helped him get assured of care in a series of living arrangements in community foster homes and long term care facilities.  He lived 15 of these years in the Care Center of Honolulu.

“I sincerely believe he would have lived much longer and definitely, more productively and happily if there were an ALS Residence in place,” mused a heartbroken Katherine, “He is the reason I have been very determined about having one in Hawaii. Seeing him go through  preventable bed sores, infections, etc. was frustrating.  I was powerless beyond being vigilant and his vigorous advocate.  ALS patients definitely need a special place for proper care. Only in an ALS Residence!”

Brian was 61 when he passed away on July 9, 2019.  A Celebration of Life is pending and will be announced later.