ALSFH’s  next fundraiser is a bowl-athon in Kailua Pali Lanes bowling alley in early November. The 3-person Board is currently discussing details with the bowling alley management.  The ALSFH fundraiser, tentatively set for November 10, will give local residents a chance to play in the Pali Lanes in a community-led fundraiser before its demolition  in early 2019. Landowner Alexander & Baldwin plans to create a community park in its current location. 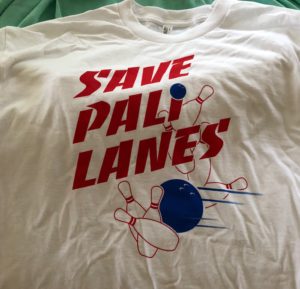 “Save Pali Lanes” is the signature protest message of kailua activists.

The fate of Pali Lanes is the subject of an on-going debate between activists in Kailua and A&B, that has for years talked of closing down the bowling alley. A&B has recently contracted with Ward Research, Inc., to survey Kailua residents regarding the changes that have occurred within Kailua town following its takeover from Kaneohe Ranch in 2013. Changes included demolishing the old Don Quijote (formerly Holiday Mart) and the Kailua Cinemas which were replaced by Target. The former Macy’s and Liberty House structure is being partitioned into office/business spaces. The Kailua Neighborhood Board has staunchly fought these changes.

The most recent controversy over Pali Lanes has brought the fight to the City Council to declare the building a historic site to prevent its demolition.  The bowling lanes lease is up at the end of January, 2019.

The fundraiser hopes to stir up nostalgic memories involving the bowling alley, the last remaining significant structure in Kailua town. The Board promises more details, including how to participate, in the coming days.